Our latest updates and plans for future projects will be posted here! Want to know everything about the progress of our games? Don't miss one of our posts and you won't miss anything!

Little of an update

I know it's been a while since anyone has heard from me,  so I'm leaving this quick, small update. ^^

Currently, IRL, my practical exams are over and I'm preparing for my final exams this year, so I'm giving less attention to game-making and story writing of course. However, I'm not putting things on hiatus, but rather making small progress (and that's better, isn't it? XD)

The update is, there are a lot of revisions on the story for the new game, and nothing is 100% decided yet, so I don't want to reveal any information. XD That is, until I have solid news to give.

I'm trying to make the next project larger than any of our previous works, and will even try to get a team to work with me. It's still too early to say anything though. XD Let me finish my exams and then I'll have my mind free for this one.

That should be all, but I won't leave you without any previews. Here's a map of the village of our main heroine. Any opinions are welcome!

It's been some time since I've last updated, but I finally have some quality update.

Remember how last post I was desperate for any ideas? :v I was really keen on making a new game but there were simply no stories in mind. Well, as they say, inspiration finally striked. XD

I won't reveal any details story-wise right now, but let's just say that this game will be a tad longer than the previous games. The big surprise? It's not made in RPG Maker XP, so it's a whole new style. That's right, I've finally developed and decided to switch to RPG Maker VX Ace. :X

I've already started mapping, as well as laying out the basics for the game systems. Furthermore, the main characters have graphics which is something not found in any of our previous games.

Anyways, I have a screenshot.

Everything is a work-in-progress and subject to change, but let's take a look at how things are supposed to be:

Comments, everyone? I'd appreciate them!

So yup, although I finished exams about a week ago, I have no updates about any new games yet.

I don't know if it's because I'm worried about next semester or my mind is worn out from the last one, but I am too tired to think about an idea for a new game, both mentally and physically. XD Emphasis on physically; I really have been having weird aches around all parts of my body -.-; . . .

On a better note though, although it might not be related, I am writing a new story. XD I have a couple of ideas for short stories, too as well but the one I am focusing on is more of a longer one that's chapter-based. However, I am not releasing any chapters yet or even information yet. XD I'd like to finish a large portion of the story first before releasing anything about it. Why, you ask? Because I started a couple of two long stories before and stopped them halfway, and I don't want the same thing with release and terminate to happen again. XD

"Hmm, so you have so many ideas for stories but can't come up with something for a new game?"

Soo hmm, that should be it. I am thinking of making a guest book on this website and perhaps a section for my stories, but I don't know. XD I'll update here once more should any ideas come up, hopefully soon.

Hey guys! How have you been? Sorry there hasn't been much of an update recently-I hate college and how busy it makes me. XD

Well, I have a couple of exams left to do before I can enjoy my winter vacation (which is just a couple of weeks or something but oh well . . . ) but I am already thinking ahead of what to do. XD Movies to watch, stories to write, games to make . . . you get the idea. XD

Although honestly, I haven't had any inspiration for a new game yet. Stories are always in my mind but games are more difficult. :3 I can't even decide whether I'd like to work on a long game or a short one yet. The longest we have right now is Fantasy on Valentine's Day and that's just about 2 hours worth of gameplay. A long game needs time commitment, patience and more importantly, the ability not to give up on it halfway. :v

I had a number of tries before and needless to say, they were big failures.

Although it could be because I had an unsettled personal life back then with lots of traveling and moving about, and I was young and pretty unexperienced. Still, I can't tell if I would be patient enough. Perhaps if there is enough audience motivating me though, that could make a difference. XD

So yup, that's the update for now.

I'll try to post more and ehh, yeah, I need to put more work into this site really. And the forums have been dead too . . .

But at least some good news. We're near the 200 downloads for Fantasy on Valentine's Day! And the downloads just keep going up . . . I'd just love for a rating or two to get the game more up there. D:

Discussion! Do you prefer long or short games?

This is a question that popped in my head a couple of days ago, as a game developer and all. XD As I've been thinking of ideas for a new game, I thought: why not try to make a lengthy game this time? Even though my previous tries at this were an utter failure, I believe I've matured and learned enough to actually give it a try. After all, we've released 3 games so far, the longest was about 2 hours of gameplay. Why not try something different?

But then I thought: would this affect the quality of the game, the gameplay? Is it more important to have a long game full of battles and action with plot twists, or rather a small game with more story focus, simpler in ideas, not so many battles but concentrated in the atmosphere?

As a game developer, I am not sure if I can answer this question properly. So I am asking for YOUR opinion on this: Which do you prefer? To make it even more specific: would you like to see Snow Rose Games' next game a long or a short one?

Waiting for your opinions!

Have you tried out Fantasy on Valentine's Day yet? Tell us your opinions!

Have you tried Fantasy on Valentine's Day yet? We're quite curious to hear your feedback, you know! Please post a comment here about your thoughts of the game!

You can also join our forums, let us get to know you and enjoy various discussions in all fields. Don't forget your feedback as well!

Fantasy on Valentine's Day finally out!

Yes, it's here! Our third completed game has finally made it to the light! 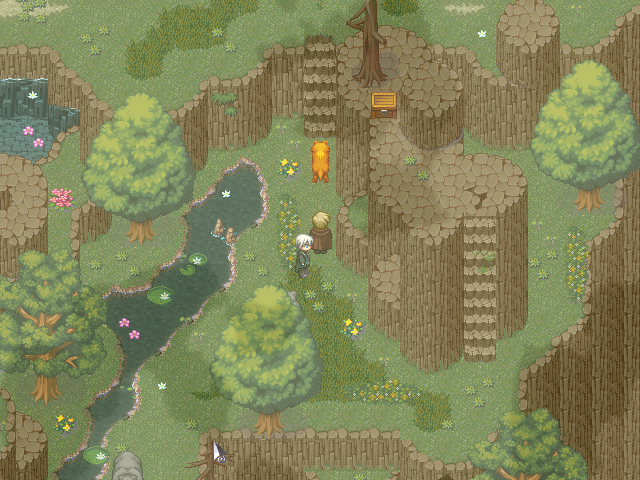 Join Florence on his journey in order to restore Isabella's eyesight and win her love!

Well, I really can't believe that this day has come at last. The development of this game started early this year, in February I believe. I worked on it day and night and put a lot of effort in, but then college started and I had to put it on halt for about six months or something. XD Continued working on it in August, and well it's finally here!

This game may not be the best, but it does really mean a lot to me for I worked the hardest on it. I really hope you enjoy it, folks, and please let me know of your reviews and opinions, whether here or in the forums. ^^

Special thanks to these awesome guys who beta-tested the game and also provided wonderful advice on how to make it better,

You guys are amazing! Thank you!

This, I suppose, is a post for the future. XD The site isn't released yet but it definitely will be released during this week along with the release of our newest game, Fantasy on Valentine's Day. I must say I'm excited and optimistic this time-the site is definitely far better than past versions and well, it's released with 3 completed games and that's an advantage on its own.

I am also quite enthusatic about the release of Fantasy on Valentine's Day. Personally, I think it's the game I've enjoyed working on the most and came with the best results as well. Well, I do believe that this will be better than Arabian Nights and Fantasy on Mother's Day. XD

I started working on this game back in February, I think. I was quite excited back then as I got the inspiration for the idea, and started working for a couple of weeks non-stop, finishing a whole lot of work of it, around 80% I'd say, proudly. XD But then college started and with its stress taking its toll on me, I had to put the project on halt for some months, and only resumed working on it again in around July or August.

And well, we're approaching the end of September, and I'm about to release it. ^^

Reminds me that I released Fantasy on Mother's Day back in September, too. Hmm that's a good sign. XD

Well, stay tuned-I say this to myself more than anything now XD-Snow Rose Games is coming as fast as a train! :v XD

The site is released now and the forums are up and running . . .

Well yup, this is my second entry and it comes a little after the site has been released, before the release of Fantasy on Valentine's Day, contrary to what I expected. XD

Well, I haven't got much to say but the beta-testing is going quite nicely so far! I have to thank our beta-testers for all their hard work,

You're all doing an amazing job! Thanks for all the efforts you've been putting into this.

The official release will definitely be during this week, let's hope it's as soon as possible!

Check us out on: